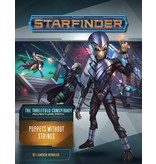 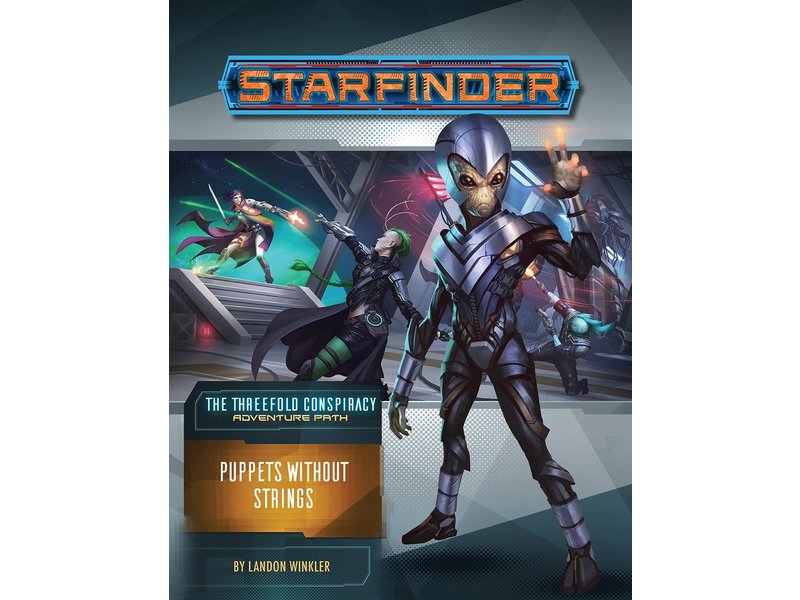 With bounties on their heads and evidence of a conspiracy that goes
all the way to the top of the Pact Worlds government, the heroes travel
to Absalom Station to clear their names and root out the duplicitous
agents. But time is of the essence, as the suspects are on the verge of
being elected onto the powerful Pact Council. With the operatives
unmasked, the heroes have their final chance to come face-to-face with
the puppet master behind all their troubles and the architect of the
vast conspiracy that threatens the entire system!

“Puppets Without Strings” is a Starfinder Roleplaying Game adventure
for four 11th-level characters. This adventure concludes the Threefold
Conspiracy Adventure Path, a six-part, monthly campaign in which the
players unravel the machinations of insidious aliens who have
infiltrated galactic society. This volume also includes advice on how to
keep your campaign going past the final encounter, a look at magical
training academies across the galaxy, and a selection of new and
inexplicable monsters.

Each monthly full-color softcover Starfinder Adventure Path volume
contains a new installment of a series of interconnected science-fantasy
quests that together create a fully developed plot of sweeping scale
and epic challenges. Each 64-page volume of the Starfinder Adventure
Path also contains in-depth articles that detail and expand the
Starfinder campaign setting and provide new rules, a host of exciting
new monsters and alien races, a new planet to explore and starship to
pilot, and more!