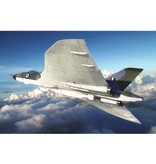 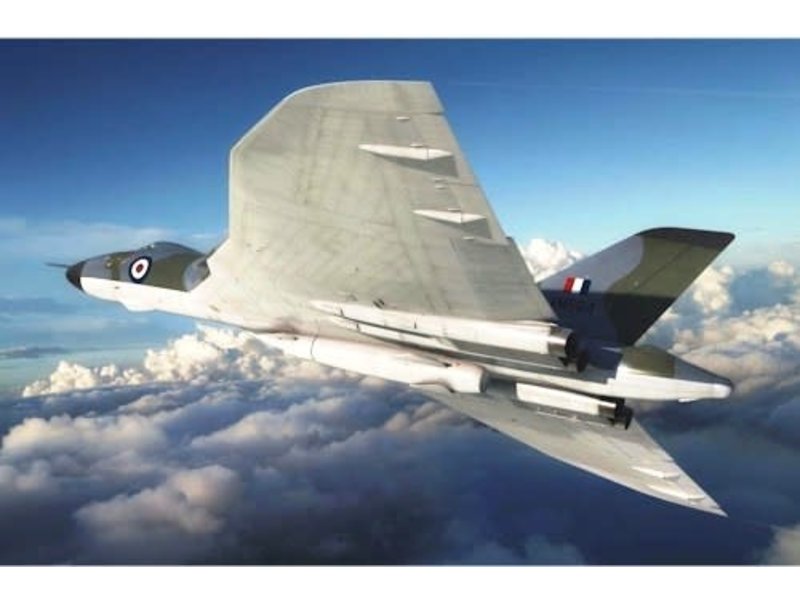 Occupying a significant position in the history of post war British aviation, the Avro Vulcan was without doubt one of the most distinctive aircraft ever to take to the skies, with its huge delta wing profile becoming almost as iconic as the elliptical wing of the Supermarine Spitfire.

Built to satisfy an extremely demanding Air Ministry requirement for a fast, high altitude strategic bomber, capable of carrying a ‘special’ payload of 10,000 imperial pounds in weight (a nuclear device), the new aircraft was intended to serve as an airborne deterrent to any future military threat against the UK, with the required specifications representing a 100% increase in the capabilities of any previous British bomber aircraft.

When the Vulcan made its maiden flight in August 1952, the Avro team were well on the way to presenting the Royal Air Force with not only the world’s first delta bomber, but also one of the world’s most effective strike bombers. Interestingly, all this was achieved just nine years since the Avro Lancaster’s of RAF No.617 Squadron had launched their famous raid against the great dams of the Ruhr Valley.

As the Avro Vulcan entered squadron service with No.83 Squadron at RAF Waddington in July 1957, Britain now possessed the fastest nuclear capable bomber in the world. It seems strange to describe an aircraft which possessed such potential for untold destruction as Britain’s most effective peace keeping asset, however, that is exactly what the Vulcan turned out to be.

Throughout the aggressive posturing of the Cold War, the Warsaw Pact nations were in no doubt that if they dared to launch an attack against a NATO member country, the consequences of the inevitable retaliatory strike would be catastrophic. Without Doubt, during the early years of its service career, nothing represented this doomsday scenario more effectively than the mighty Avro Vulcan.

Evolution of the Avro Vulcan B.2
As the Royal Air Force exhaustively trained their new Vulcan crews to provide Britain with an effective Quick Reaction Alert strike force, Avro engineers were already working to improve the capabilities of their original, iconic design. In order to ensure the aircraft continued to maintain its effective deterrent threat and stayed one step ahead of advances in Easter Bloc fighter and surface-to-air missile technology, designers incorporated developments which endowed the aircraft with greater range, speed and altitude performance. The installation of more powerful versions of the Vulcan’s Bristol Olympus engines would result in a number of unforeseen stability issues with these first bombers, which concerned designers enough to necessitate a re-design of the original wing shape.

By the time the definitive B.2 variant of the Vulcan entered service, the aircraft’s wing area had increased significantly and although still classed as a delta, would look quite different from the first bombers which entered service. To cope with the increased power availability from subsequent engine upgrades and to cure the instability issues of the original straight wing design, the B.2 wing had two defined kinks in its leading edge, well forward of the profile of the original wing design. Rather than detract from the pleasing aesthetics of the early Vulcan’s delta wing, the B.2 actually enhanced the profile of the aircraft and even though these changes were obviously made for reasons of operational effectiveness, as opposed to appearance, the B.2 would go on to be considered the most famous (and most numerous) of all the RAF’s Vulcans.

The service introduction of the Vulcan B.2 in July 1960 coincided with the availability of more capable nuclear weapons for the V-bomber force, both in number and destructive potential. It would also bring about a change in thinking regarding the delivery of such weapons, as significant advances in Soviet anti-aircraft technology now threatened the success of a free-fall gravity bomb mission. A significant new weapon would have to be developed in order to maintain the deterrent threat of the Vulcan and its V-bomber partners.

Developed to maintain the validity of Britain’s nuclear deterrent threat, designers at Avro produced the powerful ‘Blue Steel’ air-launched, nuclear stand-off missile, which would allow V-bomber crews to launch their attacks 100 miles away from their intended target and out of the range of Soviet surface-to-air missile batteries, allowing crews valuable additional time to avoid the resultant blast. Further boosting the effectiveness of the V-bomber force, the arrival of ‘Blue Steel’ raised the nuclear stakes in Britain’s favour once more and would have caused much consternation amongst the Warsaw Pact nations.

The responsibility of providing Britain’s strategic nuclear deterrent passed to the submarines of the Royal Navy in July 1969 and saw the RAF performing its final V-bomber ‘Blue Steel’ mission late the following year. Although taking on a more conventional strike role, RAF Vulcans would retain a nuclear capability and maintain their position as one of the world’s most effective bombers for the next fourteen years, before finally being withdrawn from service. Due to the affection in which this aircraft was held by the British public, the Vulcan Display Flight was almost immediately formed to operate one aircraft on the UK Airshow circuit for a further nine years, before itself being disbanded.

To the amazement of the historic aviation world, the last flying Avro Vulcan, XH558, the aircraft which had previously served as the Vulcan Display Flight aircraft, triumphantly returned to the air once more, this time in the hands of a civilian organisation in October 2007. Over the course of the next eight years, the Vulcan thrilled millions of people around the country, becoming something of an aviation national treasure – a relic of the Cold War which was held in great public affection.