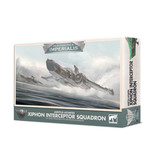 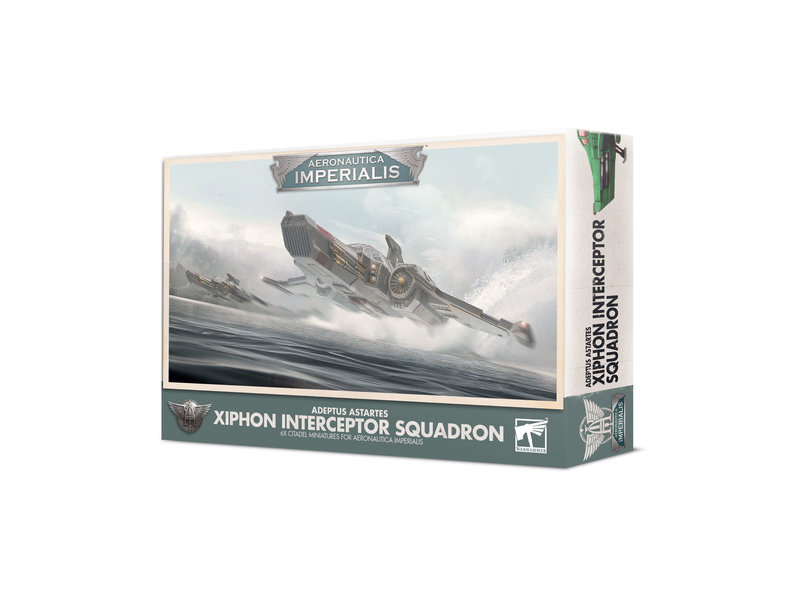 Fast and nimble by the standards of Imperial aircraft, the Xiphon Interceptor has been employed by the Space Marines since the days of the Great Crusade. Capable of combating the myriad threats the Imperium faces, the Xiphon can obliterate both air and ground targets with ease, ensuring the enemies of Mankind can never escape the Emperor's wrath.

Harder to take down than most fighters, and packing some serious firepower in the form of four lascannons and a missile array, Xiphon Interceptors will scythe through even the staunchest opposition. The frag missiles can be traded out for krak missiles to pound ground targets and with hunter-killer missiles for dogfighting supremacy. A squadron of these aircraft is more than a match for most foes, and this box gives you a whopping six of them with which to bolster your fleet.

- 6 multipart plastic Adeptus Astartes Xiphon Interceptor miniatures
- 6 Aeronautica Imperialis bases (Each base designates the model’s front, rear and side arcs as well as speed and altitude dials. Each base also includes a clear stand to connect the aircraft to the base.)
- 1 Space Marine Squadron transfer sheet

The rules for using these miniatures in games of Aeronautica Imperialis can be found in the Wrath of Angels boxed game. These miniatures are supplied unpainted and require assembly – we recommend using Citadel Plastic Glue and Citadel paints.