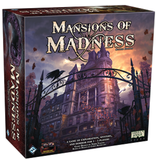 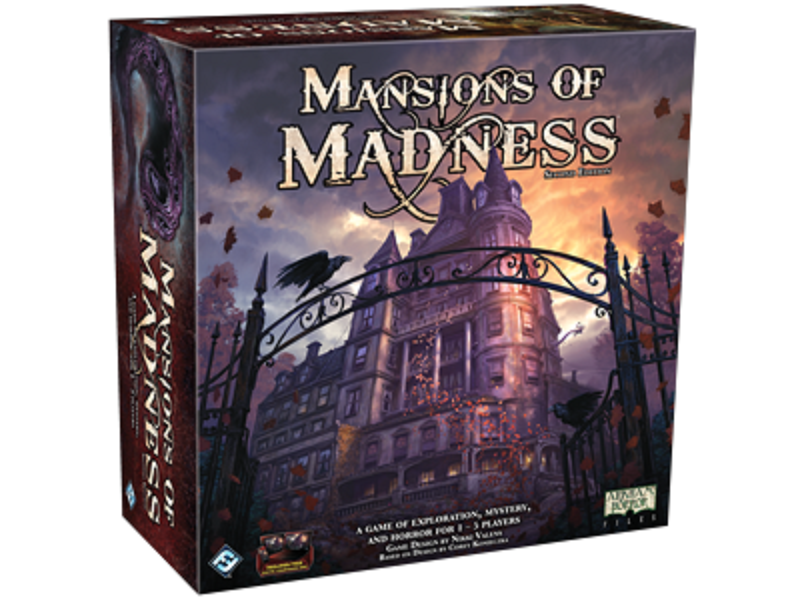 This fully cooperative adventure will take you and up to four fellow investigators through the dark and desolate halls and alleyways of Arkham. Much like the original Mansions of Madness, the second edition sends you through a series of thrilling and confounding scenarios in which you must explore unpredictable maps haunted by bloodthirsty monsters, in order to solve intricate puzzles and uncover ominous secrets. Focus your mind and grab a weapon…fast!

While the haunting spirit of the classic favorite remains the same, Mansions of Madness Second Edition’s innovative app takes a new and unique approach the sinister Arkham universe. In removing the need for a Keeper player, the app enables you to play a fully cooperative game, and shrouds each scenario’s randomized secrets in complete and utter darkness. Throughout every game, the app generates an entirely unique map, full of differing items to utilize, monsters to confront, and events to endure. Instead of the map being fully visible from the start of the game, however, the app obscures the majority of the board in shadows until you endeavor to explore further.

Spine-chilling creatures will pursue you through claustrophobic and daunting scenarios as you search for answers to Arkham’s many mysteries. Your quest for truth and respite may take you through a looming mansion or down the deserted streets of Innsmouth, but no two games will ever be the same. Should you choose, for instance, to investigate the puzzling happenings at the Vanderbilt mansion in Cycle of Eternity, you will find yourself entering the same foyer and seeking the same ultimate truth every time. But through each door beyond lies the unknown, as the map and the monsters hiding in its shadows change with every play.

Whichever identity you assume will have great bearing on your ability to conquer the monsters and mysteries before you. Each of the eight keen investigators is gifted with unique skills, abilities, and attributes, and may either take you down the road to success…or to madness. The athletic Rita Young, for example, is strong and willful, able to take up to nine physical damage before failing to overcome the pain. Wendy Adams, on the other hand, can take only six damage, but little Wendy has a keener eye and a less fragile mind. Each of your investigator’s six skills: strength, agility, observation, lore, influence, and will, have the chance to help you escape a terrible fate. Find yourself overwhelmed by injury or insanity, though, and your whole world may unravel.

Step Into The Shadows

Once you begin playing your chosen scenario, the companion app will serve to guide you every nerve-wracking step of the way. In removing the need for a Keeper player, the app allows you and your fellow investigators to play a fully cooperative game, seeking out each clue and fighting every monster as a team. Should you desire to confront whatever waits in the shadows by yourself, the app even supports single-player games.

Not only does the app take over the responsibilities of the Keeper, but it does so in a wholly unpredictable way, randomly generating the scenario’s map, the monsters that haunt it, and the paralyzing events you will have to endure, all in unique combinations every time. While your ultimate objective remains the same, each unexpected and twisted detail will be exposed as you explore the map and the the app reveals its gruesome secrets to you. The rooms still concealed behind closed doors and the terrors within, however, will remain unknown to you until you are able to reach them.

If you are no stranger to the investigations of Mansions of Madness and still in possession of the investigator minis, monster figures, and map tiles from the first edition of the game, you can incorporate them into the adventures featured in this edition. You do not need the conversion kit in order to play Mansions of Madness Second Edition, though its contents combined with the first edition components will greatly expand the possibilities within your game. The terrifying Dunwich Horror, the haunting Cthonian, and fifteen other monsters from the first edition may linger to haunt you in the second. You may also make use of sixteen additional investigators, by pairing the new cards with your existing figures in order to further customize your second edition investigative team. In order to use these first edition components, simply input which items you already have into the app, and the horrors within will haunt and expand your game.

There Is No Escape

The unnatural and vicious monsters of Arkham await your bold entry into the terrifying world of Mansions of Madness Second Edition. Prepare to advance your team of investigators through dark and desolate halls and alleys, fighting back the bloodthirsty fiends and solving intricate puzzles as you discover the truth and save this cursed region from a horrible fate. Can you feel your spine tingling? The horror is just around the corner…